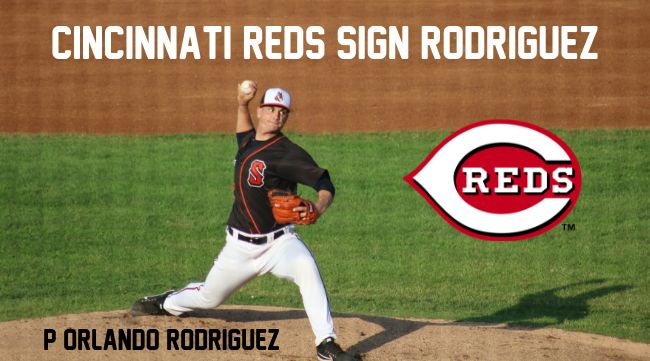 SCHAUMBURG, IL — It is with great pleasure that the Schaumburg Boomers, presented by Wintrust Community Banks, announce that the contract of right-handed pitcher Orlando Rodriguez has been sold to the Cincinnati Reds.

Rodriguez made just two starts with the team and was slated to start on July 4 before his contract was purchased. The product of St. Thomas University in Florida worked 13.1 innings and allowed just three runs on nine hits with 12 strikeouts in his first two outings as a professional, logging an ERA of 2.03. Rodriguez made his debut with the Boomers on June 18, allowing one run in 7.1 innings and followed that showing with a six-inning effort against Southern Illinois on June 23.

“We are very proud of Landy and excited for him,” said eighth-year Schaumburg manager Jamie Bennett. “He’s an outstanding young man. He does things the right way on the field and is an excellent teammate. We wish him the best with the Reds.”

While at St. Thomas, Rodriguez helped guide the team to the NAIA National Championship game. Rodriguez struck out 113 batters in 95.2 innings this season and departed as the program’s all-time leader in wins and strikeouts.

Rodriguez is the first player from the Boomers to have his contract purchased this season and will report to Billings, Montana to join the Billings Mustangs in the Pioneer League.