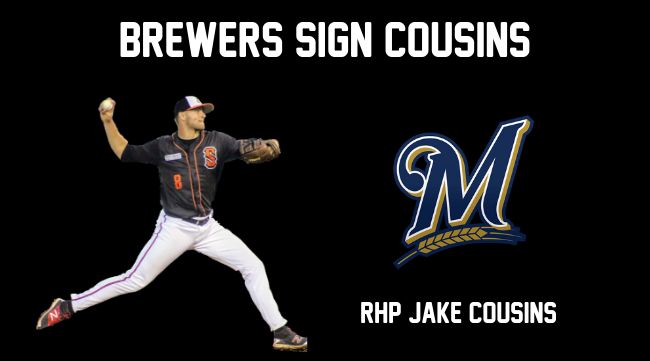 SCHAUMBURG, IL — It is with great pleasure that the Schaumburg Boomers, presented by Wintrust Community Banks, announce that the Milwaukee Brewers have purchased the contract of right-handed relief pitcher Jake Cousins.

Cousins joined the Boomers at the end of May following his release from the minor league system of the Washington Nationals. The West Chicago, Ill. resident, who starred at Wheaton Academy, was instantly slotted into the back end of the Schaumburg bullpen. Cousins sported a 1-2 record with an ERA of 0.47 during his time with the club. The righty allowed just one earned run over 15 outings spanning 19.1 innings. Cousins held opponents to a .174 average while walking three and striking out 18. The first-year Boomer notched 11 scoreless appearances and struck out at least one batter in 11 appearances as well.

Cousins was originally chosen in the 20th round of the 2017 draft by the Nationals out of the University of Pennsylvania, spending two years with the Nationals. Cousins was honored three times with all-conference recognition by the Ivy League with a first team choice in 2017, a second team nod in 2015 and an honorable mention selection in 2014.

Cousins, who is currently in Arizona awaiting his assignment, is the second player from the Boomers to have his contract purchased this season, joining Landy Rodriguez. Rodriguez joined the Reds earlier this month and owns 14 strikeouts over nine innings of work in a pair of starts for the Billings Mustangs in the Pioneer League. Other former Boomers active in the affiliated ranks include Garrett Kelly (Cubs), Alec Kenilvort (Brewers) and Tom Colletti (Padres).