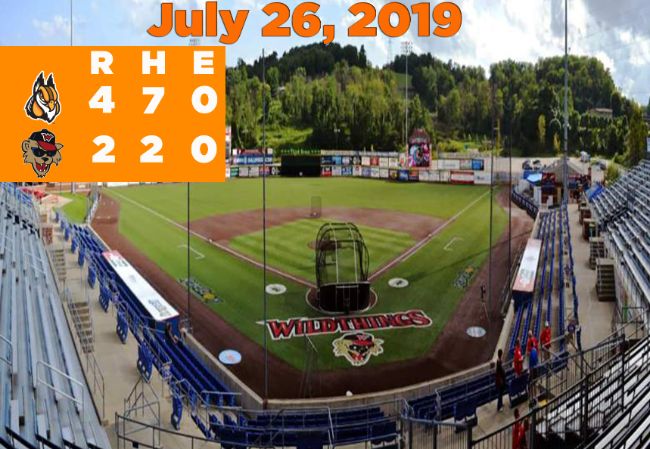 WASHINGTON, PA — Connor Oliver drove home all four runs as the Schaumburg Boomers, presented by Wintrust Community Banks, secured the 400th win in franchise history with a 4-2 victory over the Washington Wild Things in the opener of a weekend series in Pennsylvania.

Oliver opened the scoring in the top of the second with a two-run homer, his third of the year, also scoring Nick Oddo who singled with one away. Clint Hardy singled to begin the third and Chase Dawson followed with a walk. Both scored with two outs when Oliver doubled down the right field line to push the advantage to 4-0.

The Boomers did not record another hit until the ninth, but did not need to thanks to a solid pitching performance. Gunnar Kines allowed single runs in the third and fourth but allowed just two hits while striking out 10 in his fourth career double-digit strikeout showing. Kines made his 52nd start on the mound, surpassing Seth Webster for the franchise’s all-time lead on a historic night. Darrell Thompson struck out four in two innings and Connor Eller notched his 15th save with a perfect ninth. The Boomers retired the final 17 Washington batters to come to the plate.

Oliver and Jimmy Galusky posted two hits apiece in the win as the Boomers finished with seven while limiting Washington to just two. The pitching staff has recorded double-digit strikeouts in five straight and six of the last seven affairs. The win also marked the 400th for Jamie Bennett, who is the only manager in team history.