Eller Tabbed as Pitcher of the Week 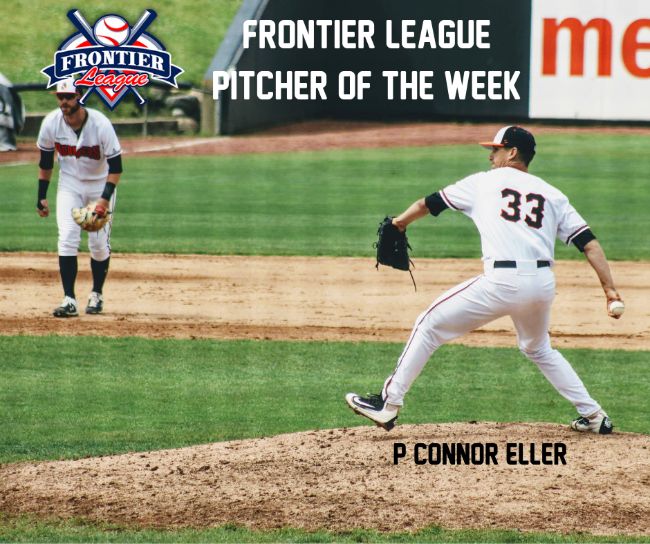 SCHAUMBURG, IL — It is with great pleasure that the Schaumburg Boomers, presented by Wintrust Community Banks, announce that closer Connor Eller has been chosen as the Frontier League’s Pitcher of the Week.

Eller pitched in only three games during the week. It isn’t often that a reliever earns pitcher of the week, but the closer mowed through the opposition with nine-up and nine-down in three perfect innings. The right-hander struck out five of the nine batters faced and saved three games, two of which were one-run contests. Eller leads the league in saves with 16, tied for the third most in single season team history. The Arkansas native has pitched in 30 games and owns a 4-2 record to go with a 1.99 ERA.

Eller joined the Boomers this season following time with the Blue Jays, where he was teammates with MLB phenoms Vladimir Guerrero Jr. and Bo Bichette. The product of Ouachita Baptist immediately slid into the ninth inning role and has converted on seven consecutive save opportunities for the Boomers and is 16-for-19 on the season with 32 strikeouts in 31.2 innings of work. Eller was one of two Boomers to represent the team at the All-Star Game earlier this month in New York and tossed a scoreless sixth inning in a 7-0 win for the Frontier League over the Can-Am League.

Eller becomes the third Schaumburg pitcher to earn the weekly award this season. Aaron Rozek won the award following a 3-0 shutout of Joliet on May 24, the first complete game shutout of the year in the league. Gunnar Kines claimed the award after shutting out Joliet on June 19, also by a 3-0 score. Historically, Schaumburg has claimed a weekly award 16 times, seven of which have been pitchers. Eller is the first reliever to earn the award in team history.

Pointstreak, the official statistical provider of the Frontier League and the Independent Professional Baseball Federation, makes the player of the week selections every week and has been selecting winners since 2014.