Boomers Shutout in Opener with Florence 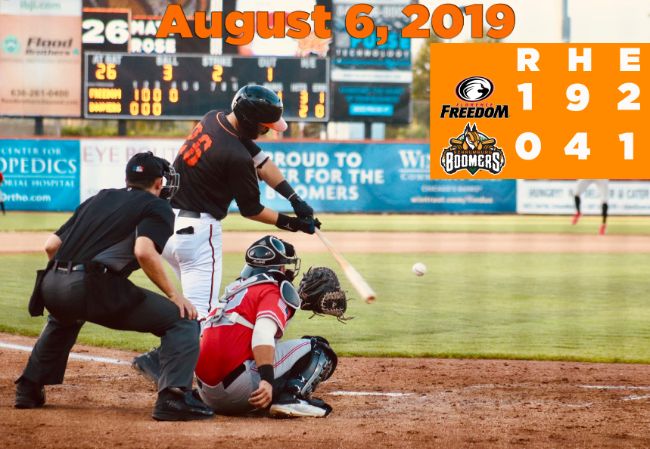 SCHAUMBURG, IL —The Schaumburg Boomers, presented by Wintrust Community Banks, surrendered just one run, but dropped a 1-0 decision to the Florence Freedom in the opener of a mid-week series at Boomers Stadium.

Florence scored the only run of the game in the top of the first. Isaac Benard opened the game with a double to center and scored the lone tally on a two-out single from Ricky Ramirez, Jr. Schaumburg starter Gunnar Kines allowed just the single run in six innings of work, striking out nine in his ninth consecutive quality start. The bullpen held Florence at bay over three scoreless frames from Dylan Stutsman, Darrell Thompson and Connor Eller. Eller worked a perfect ninth in his first action in almost a week and has retired 20 consecutive batters. The pitching staff combined to strike out 12 in the contest.

Florence starter Scott Sebald and two relievers combined to allow just one runner to reach second base in the game. Sebald spun seven innings in the win. Quincy Nieporte notched two hits for the Boomers, who finished with four. Schaumburg has dropped four consecutive contests. The shutout marked the eighth of the season against the Boomers.