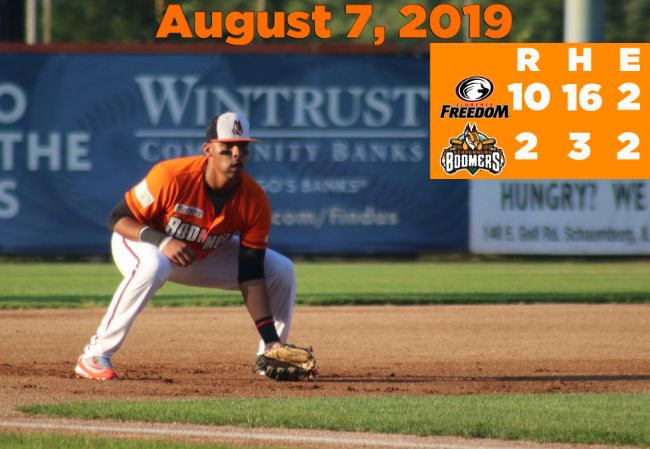 SCHAUMBURG, IL —The Schaumburg Boomers, presented by Wintrust Community Banks, suffered a fifth consecutive defeat on Wednesday night with a 10-2 loss to the Florence Freedom.

Florence jumped ahead in the first inning for the second consecutive night when Caleb Lopes, the second batter of the contest, smashed a two-run homer. The visitors added two runs in the third to move ahead 4-0 and chase starter Connor Reed from the contest.

The Boomers were able to score a run in the bottom of the fourth, breaking a streak of 22.1 scoreless innings by the Florence pitching staff. Matt Rose notched his first triple with two outs and crossed the plate on a single from Nick Oddo. Oddo added an RBI single in the sixth as the Boomers brought the tying run to the plate but could not pull through. Florence pulled away late by scoring in each of the final three innings. The Freedom scored in six different frames to improve to 8-0 against Schaumburg this year.

Reed suffered the loss, allowing four runs, three earned, in three innings of work. Jumpei Akanuma threw 3.2 innings and allowed just one earned run while Trevin Eubanks worked the final 2.1 frames. Schaumburg was limited to just three hits, two of which were from Oddo. The Boomers have just 24 hits over the five-game streak.