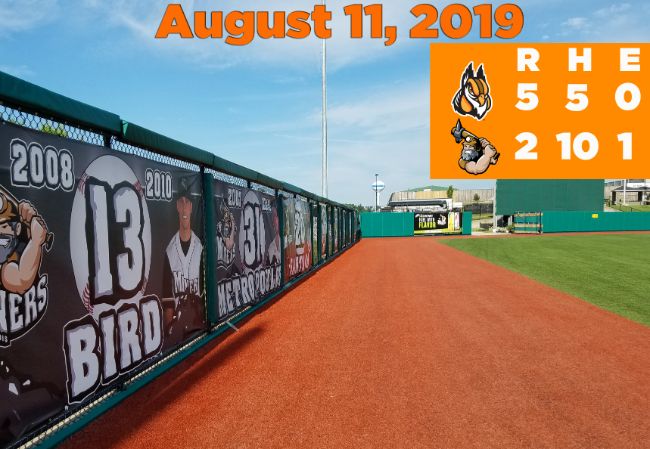 MARION, IL — The Schaumburg Boomers, presented by Wintrust Community Banks, broke an eight-game skid with a 5-2 win in 11 innings to stop the Southern Illinois Miners, who had won 10 straight, on Sunday night.

Quincy Nieporte provided the decisive blow, throttling a three-run homer with two outs in the top of the 11th to break a 2-2 stalemate. Schaumburg led for most of the contest, jumping ahead in the first inning for the second consecutive contest. Jack Parenty led off the game with a single and Clint Hardy followed with a walk. Following a sacrifice bunt, Parenty scored the first run on an error. Parenty lifted a sacrifice fly in the fifth to plate Jimmy Galusky with the second run. Southern Illinois tallied single runs in the sixth and eighth to tie the game but could not score despite having the winning run on base in the eighth, ninth and 10th.

Connor Eller worked a season high three innings in relief to grab the win. Gunnar Kines started an allowed one run in seven innings, striking out seven, but did not factor in the decision. Schaumburg scored five runs on just five hits and won the season series from Southern Illinois. Parenty finished with two hits in the victory.

The Boomers (39-39) take Monday off before opening a three-game set at Windy City on Tuesday night with LHP Connor Reed (4-6, 3.91) on the mound. Just six home games remain on the schedule this season. Visit boomersbaseball.com for tickets and information or call 847-461-3695.