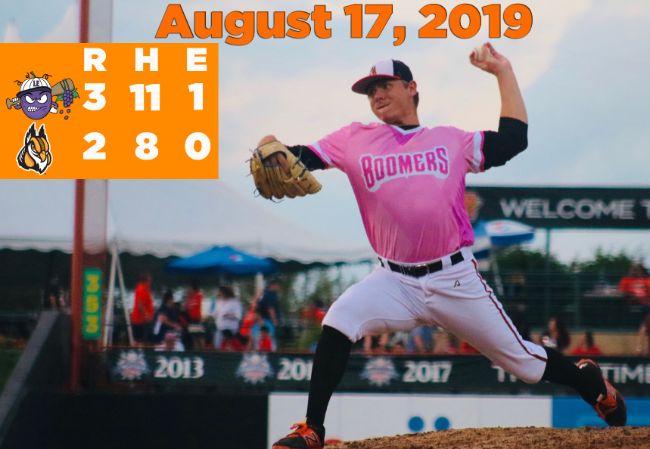 SCHAUMBURG, IL — The Schaumburg Boomers, presented by Wintrust Community Banks, dropped a 3-2 decision at the hands of the Lake Erie Crushers in the middle game of a key weekend series.

After leading for most of the opener on Friday night, the Boomers did not lead in the middle game. Jake Vieth produced the game-winning run with a solo homer in the top of the eighth on the first pitch from Dylan Stutsman to break a 2-2 tie. Both teams struggled to drive home runs as the clubs combined to leave 18 on base. The Boomers received a two-out double from Jack Parenty in the ninth but could not even the score.

Lake Erie jumped ahead 1-0 in the third with three consecutive hits against Schaumburg starter Gunnar Kines. The Boomers instantly tied the game in the bottom of the inning by generating two-out offense. Luis Roman singled and scored on a double to left by Matt Rose. Lake Erie took the lead in the fifth on a two-out, two strike RBI single from Dale Burdick, who was in spring training with the Boomers. Schaumburg loaded the bases in the sixth with no outs but managed just one run on a sacrifice fly from Nick Oddo that tied the game.

Kines worked six innings in a no-decision, allowing two runs on eight hits. Stutsman dipped to 6-3 despite working three innings. The offense managed nine hits but trapped nine on base including five in scoring position. Parenty and Rose both finished with two hits while drawing a walk.

The Boomers (41-42) conclude the series with a huge rubber contest on Sunday afternoon at 1:00 p.m. on Bark in the Park brought to you by Pella Windows and Doors. Schaumburg trails Lake Erie by 3.5 games in the East Division race. LHP Connor Reed (4-6, 3.89) takes the ball for the Boomers in the finale against All-Star LHP Pat Ledet (5-4, 2.16).

Just four home games remain on the schedule this season including the three this weekend. Visit boomersbaseball.com for tickets and information or call 847-461-3695.