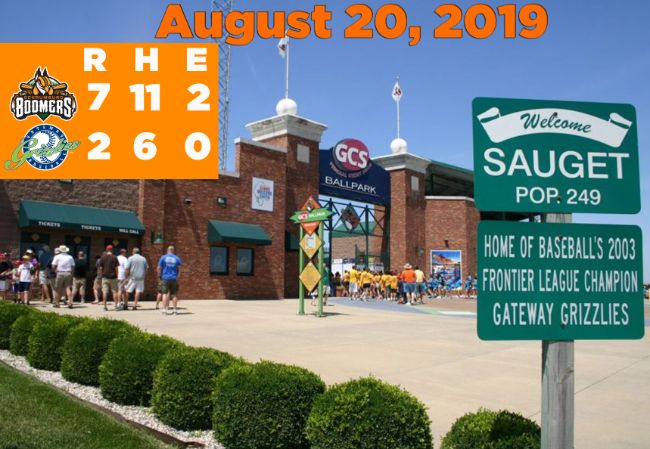 SAUGET, IL — The Schaumburg Boomers, presented by Wintrust Community Banks, hit four homers to win the opener of a three-game series against the Gateway Grizzlies by a 7-2 score in the kick-off of a nine-game roadtrip on Tuesday night.

The Boomers took the lead three batters into the contest. Luis Roman led off the game with a double and Jack Parenty followed with a walk. Clint Hardy singled up the middle to hand Schaumburg a 1-0 lead. Gateway’s Andrew Daniel hit a two-run homer in the fourth to put the hosts ahead. Hardy hit a three-run homer with one out in the fifth to put Schaumburg ahead for good. Matt Rose added his 13th homer later in the inning as the Boomers scored four runs to open a 5-2 lead. Jimmy Galusky and Roman hit solo homers in the sixth and eighth to account for the final.

Payton Lobdell worked six innings to earn the win, striking out seven. Darrell Thompson, Dylan Stutsman and Connor Eller spun blank innings to close out the victory. Roman notched four hits against his former team out of the leadoff slot. Nick Oddo added three as the Boomers finished with 11 in the win. Hardy finished with four RBIs. The four homers marked a season high total.