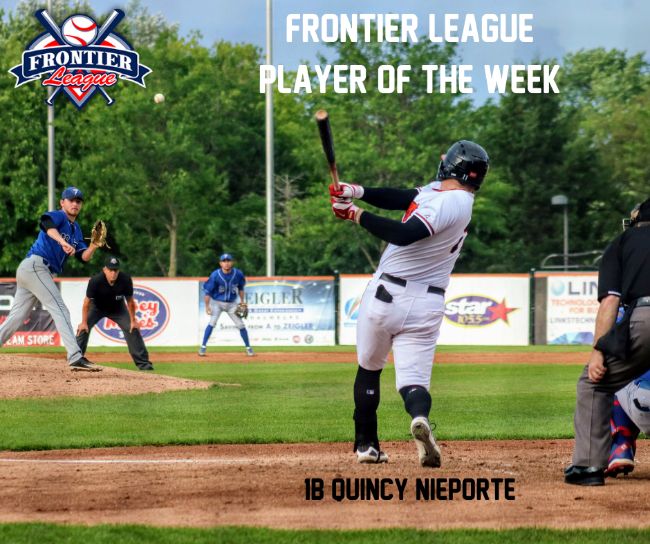 SCHAUMBURG, IL — It is with great pleasure that the Schaumburg Boomers, presented by Wintrust Community Banks, announce that first baseman Quincy Nieporte has been chosen as the Frontier League’s Hitter of the Week.

Nieporte recorded a record night on Wednesday at Gateway, becoming the first player in the 27-year history of the Frontier League to drive home double-digit runs in a contest. Nieporte set the single game record for RBIs with 10 in his first three at bats, spanning three innings in a 13-8 win. The first-year member of the Boomers drilled a three-run homer in the first, a three-run double in the second and a grand slam in the third. Six players had driven home nine in a contest with the first coming in 2004. Nieporte finished 4-for-5 on the night.

For the week, Nieporte finished with a .364 average, notching eight hits in 22 at bats while knocking home 13 runs and slugging .909. The Florida State University product scored five runs and drew three walks in five games played. Nieporte homered three times on the week, adding a first-inning two-run homer the night following his record performance. Nieporte is currently just two RBIs away from the team’s single season record of 65, set by David Harris in a Frontier League MVP season in 2017. Nieporte has been assaulting the record books with a late season surge. The righty owns 27 hits and 27 RBIs in the month of August.

Nieporte leads the league in hitting at .315 and is the only hitter in the entire league above the .300 mark. The Georgia native also ranks fourth in the league with 63 RBIs. Nieporte has reached base in 17 consecutive contests and owns a team best 15 multi-RBI games while sitting second on the club with 28 multi-hit performances. Nieporte has also caught a game and pitched for the Boomers this season while serving as the primary first baseman and hitting in the middle of the lineup.

Originally drafted by the Phillies in the 26th round of the 2017 draft, Nieporte spent two seasons with the Phillies before joining the Boomers. Nieporte hit .272 over three levels during his tenure with the Phillies, reaching the Florida State League with High-A Clearwater.

Nieporte is the first hitter to earn a weekly award this season and the fourth player overall. Connor Eller, Aaron Rozek and Gunnar Kines have all won pitcher of the week awards. Historically, Schaumburg has claimed a weekly award on 17 occasions, and Nieporte’s award is the 10th issued to a hitter.

Pointstreak, the official statistical provider of the Frontier League and the Independent Professional Baseball Federation, makes the player of the week selections every week and has been selecting winners since 2014.

Just six games remain in the 2019 season with the final three games at home August 30-September 1. Visit boomersbaseball.com for tickets before the summer comes to an end.