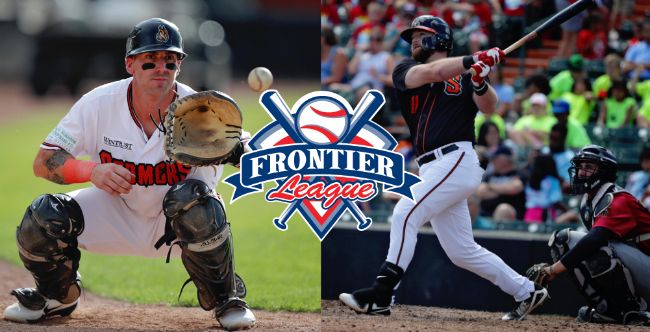 SCHAUMBURG, IL — It is with great pleasure that the Schaumburg Boomers, presented by Wintrust Community Banks, announce that three individuals have received postseason recognition by the Frontier League.

On the field, first baseman Quincy Nieporte and catcher Nick Oddo have been named as postseason All-Stars. The 2019 season marks the first time that the Boomers have collected multiple postseason All-Star selections. Off the field, General Manager Michael Larson has been named the recipient of the Bob Wolfe Award for Executive of the Year in the Frontier League.

Nieporte is the reigning Frontier League hitter of the week and has surged over the last month of the season. The right-handed hitter set a league record on August 21 at Gateway, driving home 10 runs to become the first player in the 27-year history of the league to knock in double-digit runs.

Nieporte leads the league in hitting at .316 and is the only hitter in the entire league above the .300 mark. The Georgia native is on the verge of becoming Schaumburg’s first league batting champion in the eighth season of the organization. Nieporte also ranks fourth in the league with 66 RBIs, breaking the franchise record set in 2017. The Florida State University product owns a team best 16 multi-RBI games while sitting second on the club with 29 multi-hit performances. Nieporte has also caught a game and pitched for the Boomers this season while serving as the primary first baseman and hitting in the middle of the lineup.

Oddo was a midseason All-Star this year, one of two players to represent the team in a 7-0 win for the Frontier League over the Can-Am League in New York. The left-handed hitter started the game and was also an All-Star in 2018, becoming just the fourth player in team history to log more than one All-Star selection. Oddo ranks third on the team with a .275 batting average. The third-year member of the team has hit in the middle of the order all season and owns five homers with 33 RBIs.

“We are very excited to have Quincy and Oddo selected to the All Star team,” said field manager Jamie Bennett. “Both guys have worked very hard all year and have done a lot of things for this club. Their production reaches further than just the numbers. It has been a very competitive league this year and both guys should be proud.”

In his second season in Schaumburg, Larson has helped the Boomers once again lead the league in attendance. The Boomers expanded relationships with non-profits, bolstering the organization’s presence in the Schaumburg community. The 2019 year also saw a franchise-high in corporate partnerships.

Under the supervision of the Minnesota native, the ballpark underwent renovations on the suite level this year leading to the opening of the brand new Jim Beam Club. The Jim Beam Club was radically transformed with an epoxy-poured floor, leather bar chairs, high-top tables, and a weathered-wood-clad bar appointed with the full array of liquor in the Beam Suntory line.

The Jim Beam Club was just one of many dramatic improvements to the gameday experience. Others include the Pollyanna Cabana in right field, a 21-and-over area to congregate and sample local beers. The ballpark expanded food and beverage this year, also adding the Rib Shack in right field and popcorn stand down the first base line to go with an expanded beer menu.

“I’m greatly honored to win this award.” said Larson. “We have a tremendous staff, supportive ownership, great fans and community, and a great team that makes it fun to come to work every day.”

The Boomers return home on Friday for the final three games of the season. Visit boomersbaseball.com for tickets and information or call 847-461-3695.