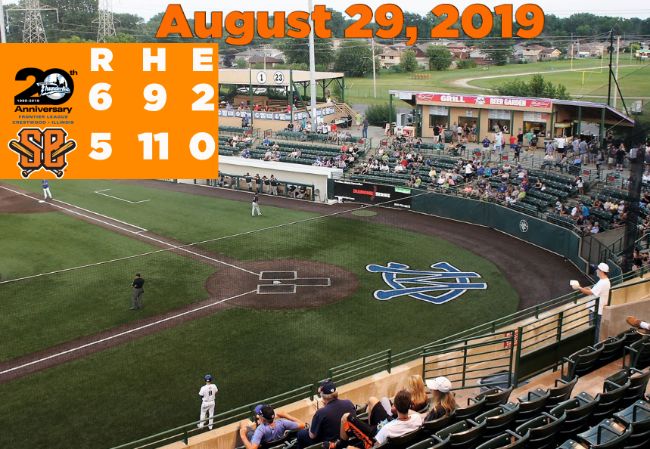 CRESTWOOD, IL —The Windy City ThunderBolts scored four times in the bottom of the ninth including a pair with two outs to rally from a 5-2 deficit and stun the Schaumburg Boomers, presented by Wintrust Community Banks, with a 6-5 win in the final road contest of the season on Thursday night.

The Boomers built a 4-0 advantage with a pair of runs in the second and again in the third inning. Luis Roman doubled home a run in the second and Dylan Jones tacked on an RBI single. Connor Oliver doubled home a run in the third and Quincy Nieporte added to his single season RBI total with a sacrifice fly. The runs appeared to be more than enough for Gunnar Kines, who retired nine in a row and allowed just one hit before a Tyler Straub solo homer in the fifth.

Matt Rose tripled to open the sixth inning and scored on a single from Nick Oddo to make the score 5-1. Tyler Alamo added a solo blast in the seventh for Windy City, battling within 5-2. The first four batters reached in the bottom of the ninth with two runs scoring. Clinging to a 5-4 lead, Connor Eller recorded the next two outs before an infield single tied the game and pinch hitter Christian Funk singled on the first pitch of his at bat to end the contest.

Kines had allowed just one homer in his first 16 starts but exited with the lead. The lefty struck out eight to set the single season team record for strikeouts with 112. Schaumburg finished with 11 hits in the game as all nine batters logged a hit. Roman and Jones both recorded a pair of hits.

The Boomers (45-48) end the season at home with three games against the River City Rascals beginning on Friday night at 6:30 p.m. RHP Erik Martinez (0-2, 3.83) will make the start for the Boomers. It will be Strikeout Stroke Night featuring postgame fireworks. Visit boomersbaseball.com for tickets and information or call 847-461-3695.