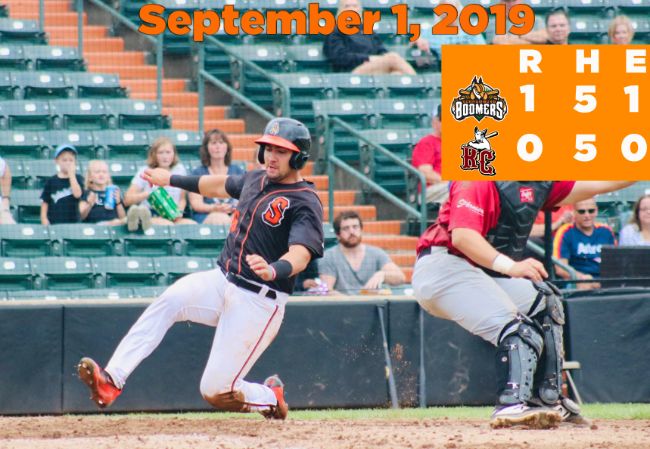 SCHAUMBURG, IL — The Schaumburg Boomers, presented by Wintrust Community Banks, concluded the 2019 season on Sunday with a 1-0 home victory over the River City Rascals.

Aaron Rozek threw seven shutout innings on the mound, allowing just five hits to earn the win in the season finale, moving to 7-5 on the year. The only run scored in the bottom of the seventh inning. Gian Martellini was hit by a pitch to lead off the inning and with two outs scored on an RBI single from Chase Dawson. Dylan Stutsman worked the eighth and Connor Eller came on for the ninth, shutting the door on his 22nd save of the year to set the franchise single season record.

Quincy Nieporte finished with two hits including a double as the Boomers finished with five. Nieporte will end the season as the league’s leading hitter, the first batting champion in franchise history. The double was the 26th of the year, moving into a tie for the most in single season history. Nieporte, a postseason All-Star, set the single season record for RBIs, becoming the first player in team history to tabulate 70 in a season. The win moved manager Jamie Bennett into sole possession of ninth place on the league’s all-time wins list. The pitching staff posted the best ERA in franchise history and ended the year with the sixth shutout victory of the season.

The Boomers finished the year with a 47-49 record and again led the league in attendance. Visit boomersbaseball.com to keep up to date with all of the offseason information or call 847-461-3695.