Middendorf Named Pitcher of the Week 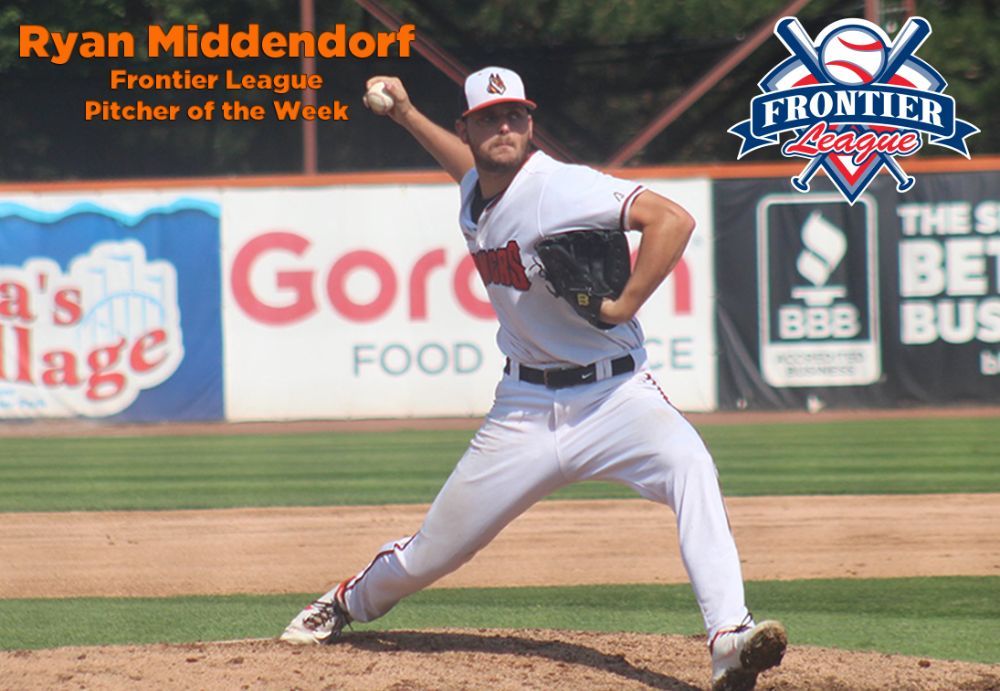 Middendorf threw a seven-inning shutout in the second game of a doubleheader against Gateway at Wintrust Field on Thursday night. The right-hander allowed just four hits in the 2-0 victory while walking one and striking out four. The shutout marked the second of the season for Middendorf. Both have come in the second game of a doubleheader. The win was the 10th of the year for Middendorf, who is just the third pitcher in team history to collect double-digit victories in a season.

Middendorf was chosen at the Frontier League Draft back in May with the seventh overall selection and is in his first season as a professional. The West Chester, Ohio native is currently 10-5 in 16 starts spanning 97.1 innings with a 2.95 ERA. Middendorf has struck out 73 while walking just 17. The 6-6 hurler currently owns a scoreless streak of 16 innings, his longest of the year. Middendorf has also posted scoreless streaks of 15, 12.2 and 12 during the year. The Lake Erie College product currently sits third in the league in ERA and is tied for the lead in shutouts while sitting second in wins. Middendorf has won four consecutive road starts, the longest streak in the league, and owns three straight wins overall. The Boomers own a 12-4 record in games that Middendorf has started.

The award marks the fourth of the season for the Boomers. Kyle Arjona was tabbed as the Pitcher of the Week on June 28. Quincy Nieporte has earned two Player of the Week awards on June 7 and July 12.

The Boomers (43-40) are atop the Central Division with the largest division lead in the league at six games over the Lake Erie Crushers. The magic number to win the division is sitting at eight. The team visits Gateway for three games beginning on Tuesday night. RHP Geoff Bramblett (2-0, 1.40) will make his second start for the Boomers in the 6:45 p.m. contest against his former team. The Boomers have four home games remaining on Labor Day weekend. Visit boomersbaseball.com for tickets and information or call 847-461-3695.