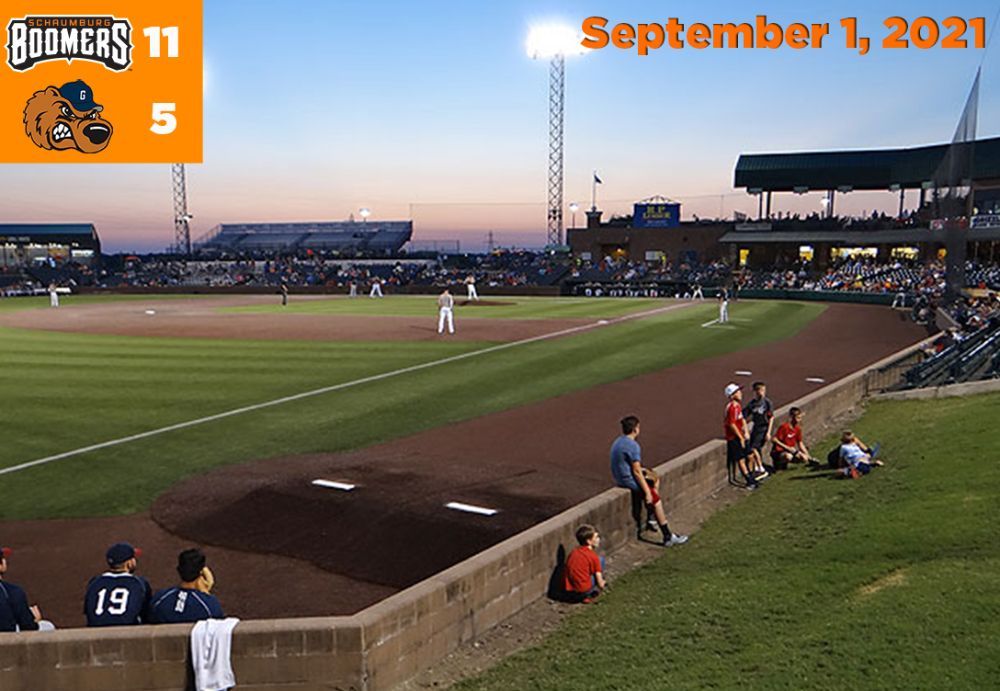 SAUGET, IL — The Schaumburg Boomers hit four homers during a Wednesday night game that saw several records tied or broken in an 11-5 win over the Gateway Grizzlies, lowering their magic number in the process.

Schaumburg wasted no time in jumping out to the lead as Alec Craig led off the game with a solo homer. Braxton Davidson opened the second with his third homer of the series and 18th of the year. Brett Milazzo added an RBI single in the inning to push the lead to 3-0. The Boomers broke open the game with five runs in the third to nab an 8-0 edge. Clint Hardy singled home two runs with the bases loaded and Nick Oddo added a three-run homer. Hardy doubled home Chase Dawson in the fourth as the lead reached 9-0.

Gateway did not go away, scoring five unanswered to pull within 9-5. Angelo Gumbs tucked a two-run homer inside the right field pole in the ninth to account for the final. The homer was the 74th of the year, setting the franchise’s single season mark.

Ryan Middendorf allowed three runs in seven innings to win his 11th game of the year, matching the franchise record. Middendorf walked one and struck out three to win a fifth straight road start, the longest streak in the league this year. Five players tallied multiple hits as the Boomers finished with 13, logging double-digit runs and hits for a second straight game. Schaumburg owns five straight wins over Gateway. Hardy tallied three hits and drove home three. Craig, who added to his team record and league lead with three more walks, matched the single game record for stolen bases with three to reach 40 on the season. Dawson swiped a pair. Dawson has reached base in 29 consecutive contests.

Following the conclusion of the contest Lake Erie lost in walk-off fashion at Joliet. The Boomers (45-40) now own their largest division lead of the year at seven games and have a magic number of five for a fourth trip to the playoffs in team history. Schaumburg will aim for the series sweep on Thursday with RHP Erik Martinez (1-1, 4.66) on the hill opposite RHP Jack Dicenso (1-0, 1.29). The Boomers have four home games remaining on Labor Day weekend with the fun beginning on Friday with White Sox night. Visit boomersbaseball.com for tickets and information or call 847-461-3695.