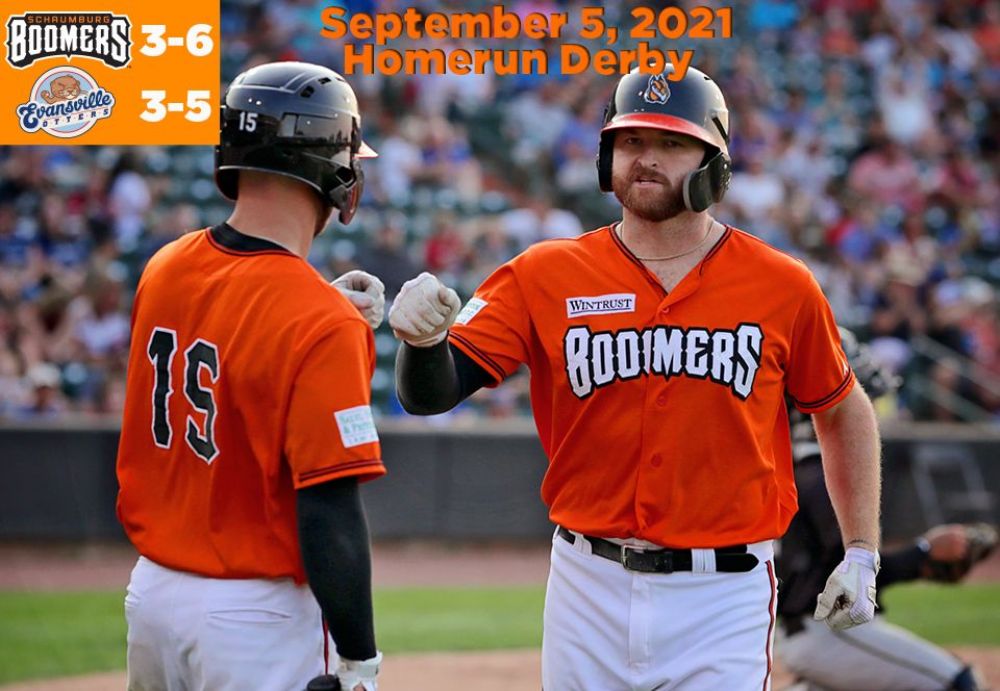 SCHAUMBURG, IL — Braxton Davidson hit a walkoff homer in the first ever homerun derby at Wintrust Field as the Schaumburg Boomers lowered their magic number to win the division to two by claiming the derby 6-5 following a 3-3 contest.

Evansville scored first for the first time in the series by plating a pair of runs in the top of the third, both with two outs. The Boomers were able to immediately tie the game in the bottom of the inning. Nick Oddo walked with one out and Alec Craig followed with a single. Clint Hardy knocked home the first run with a single and Chase Dawson notched a fielder’s choice to knock home another. Evansville grabbed the lead with a run in the fifth which held until Schaumburg tied the game against the bullpen in the eighth. Craig led off with a walk and was sacrificed to second before Quincy Nieporte doubled off the top of the wall to tie the game.

Tied after neither team could push home a run with the international runner the contest headed to a homerun derby, just the second of the season for the Boomers. Riley Krane hit two homers in the first round for Evansville but was answered by two from Nieporte. Jeffrey Baez also hit two in the second round which was answered by a pair from Angelo Gumbs. Josh Allen hit a single home before Davidson hit a pair of laser beams to end the game on the fourth pitch with the Boomers winning 6-5.

No pitchers receive a decision in a homerun derby. Geoff Bramblett logged his third quality start in as many appearances for the boomers by tossing seven innings. Jake Joyce threw the eighth and Thomas Nicoll struck out six in two scoreless frames. Hardy and Nieporte notched two hits apiece while Craig scored twice.