Davidson Honored as Player of the Week 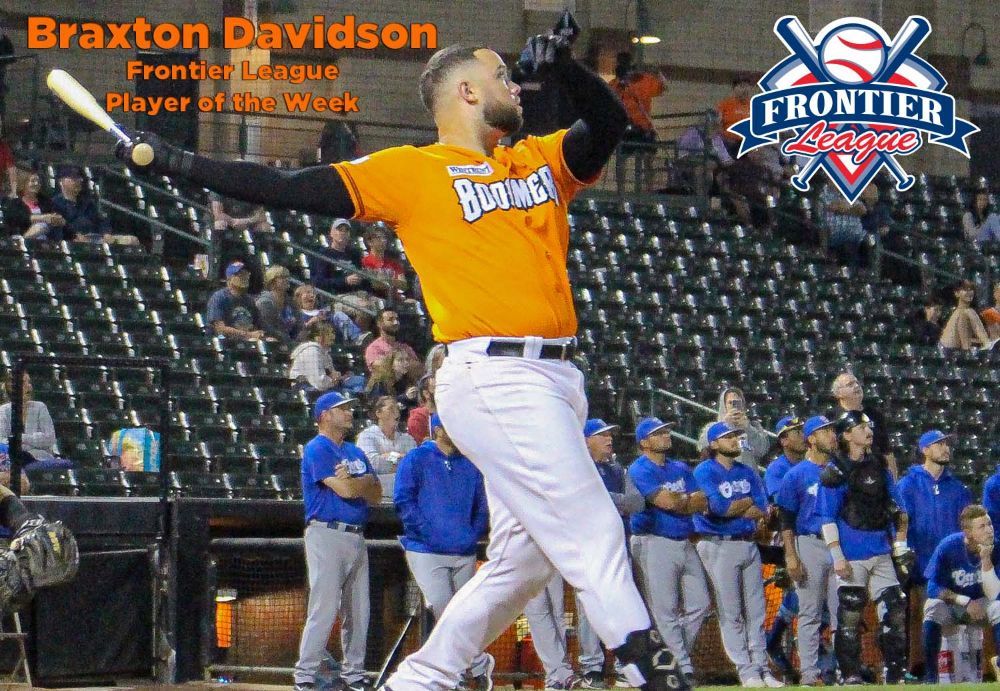 SCHAUMBURG, IL — For the second consecutive week the Schaumburg Boomers have had a player honored by the league as Braxton Davidson has been named as the Frontier League Player of the Week. The weekly awards are chosen by Pointstreak, the official statistical provider of the Frontier League.

Davidson capped his week by hitting two mammoth homers in a homerun derby on Sunday night to win the game for the Boomers. The left-handed hitter logged a .591 average over six games last week with four homers and 11 RBIs to go with six walks, finishing 13-for-22 with seven runs and seven extra-base hits.

Davidson opened the week with a multi-homer performance at Gateway on Tuesday, finishing 3-for-4 with two homers, three runs scored and six RBIs. During the second game with Gateway the North Carolina native homered, doubled and scored twice before capping the series with a double, walk and a three-run homer. Davidson reached base 10 times in the three games at Gateway and has reached base in 14 consecutive contests.

With Evansville coming to town on Friday night for a four-game series, the final home series of the regular season, Davidson opened with a 3-for-4 contest. Davidson reached base five times in the second contest with three hits including a double, a run an RBI and a pair of walks.

Davidson was acquired in a trade with Joliet on August 9 to provide a boost to the lineup and has done exactly that. Davidson is hitting .359 in 24 games with Schaumburg, recording 28 hits, 16 of which have been for extra bases. Davidson owns seven homers, 24 RBIs and 22 walks with the Boomers while posting an on-base percentage of .500 and a slugging percentage of .756, helping push the Boomers to the brink of the Central Division title and a return to the playoffs. Overall, Davidson has raised his average to .276 and owns 19 homers to go with 52 RBIs and 62 walks. The first-year Frontier League player is second in the league with 19 homers while drawing 62 walks, tied for second in the league. Davidson owns an overall on-base percentage of .421.

The award marks the fifth of the season for the Boomers. Kyle Arjona was tabbed as the Pitcher of the Week on June 28 and Ryan Middendorf, who starts today, was honored last week. Quincy Nieporte has earned two Player of the Week awards on June 7 and July 12.

With a magic number of two, the Boomers (46-43) are playing right now in the series finale with the Evansville Otters on this Labor Day in the final regular season home game. Visit boomersbaseball.com for tickets and information or call 847-461-3695.