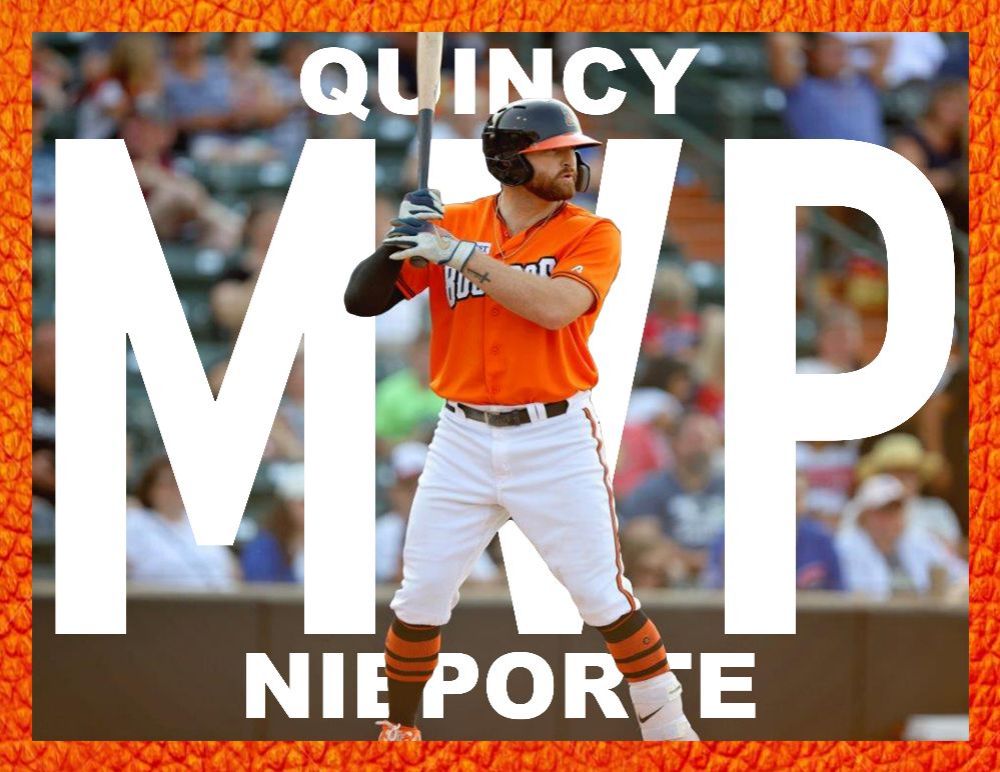 SCHAUMBURG, IL — The Frontier League announced the postseason awards for the 2021 season on Thursday and the Central Division Champion Schaumburg Boomers received plenty of accolades for success both on and off the field.

Off the field, the Schaumburg Boomers were named as the Frontier League’s Organization of the Year while Vice President/General Manager Michael Larson was selected as the Bob Wolfe Award winner as the league’s executive of the year.

Nieporte was a force to be reckoned with in the middle of the Schaumburg lineup. The right-handed hitter earned a pair of Frontier League Player of the Week awards during the season and is currently hitting .350 with 16 homers, 63 RBIs and 21 doubles. The second-year member of the Boomers currently leads the league in slugging percentage and ranks second in average while sitting in the top-10 in homers, RBIs and doubles. The 2019 Frontier League batting champion leads the team with 19 multi-RBI games and posted three multi-homer contests while owning 28 multi-hit games among 65 games played including four in a row and five of the last six. Nieporte opened the season with a 15-game hitting streak and a 19-game on base streak. Nieporte missed 20 games in July and August and was making a push for the Frontier League triple crown before that point.

Nieporte is on pace to set the franchise’s single season record for average and slugging percentage with four games remaining while ranking third in homers and fourth in RBIs. The Florida State product was also a postseason All-Star in 2019 and becomes the second player in team history to win the Morgan Burkhart Award, joining David Harris in 2017.

Dawson switched to the outfield this season and is leading the league with a franchise record nine triples. The Northwest Indiana native owns a team best 31 multi-hit games while batting .317 with 10 homers, 14 doubles and 67 RBIs. Dawson, who has played all three outfield positions, has ranked among the league leaders in hitting all season owning 106 hits with 75 runs scored. Additionally, the second-year member of the Boomers has ranked among the leaders in outfield assists. Dawson hit an inside-the-park homer on August 29 against Lake Erie. The left-handed hitter has stolen 24 bases in 25 tries, second most in franchise history and one of three players on the roster with over 20 steals. The Boomers have set single season records for homers and stolen bases this year.

The Schaumburg Boomers were awarded their fourth Organization of the Year award while Larson earned his second consecutive Bob Wolfe Award. Despite the pandemic and early season crowd limits, Schaumburg led the league in attendance for the seventh consecutive season, drawing 157,112 fans for an average of 3,415. Both numbers represented increases from the 2019 season. The average ranked third among all the MLB Partner Leagues and was just one of six teams to break 3,000 for the year. The team set a single game record for attendance on July 4 when 7,623 fans entered Wintrust Field.

"Our staff was tremendous this year and I can’t say enough about how hard everyone worked from the team to the game day employees, front office, and everyone involved." Larson said. "Everyone spent the last two years facing unprecedented and unexpected challenges. It is truly an honor to be recognized as the Frontier League Organization of the Year; and a tip of the cap to everyone in the Frontier League on navigating through the 2021 season."

The organization began a naming rights relationship with Wintrust Community Banks and also continued to grow relationships within the community and hosted regular outside events in addition to baseball.

Playoff tickets are on sale now! Schaumburg will host games one and two of the Frontier League Division Series on Tuesday and Wednesday. For tickets visit boomersbaseball.com.