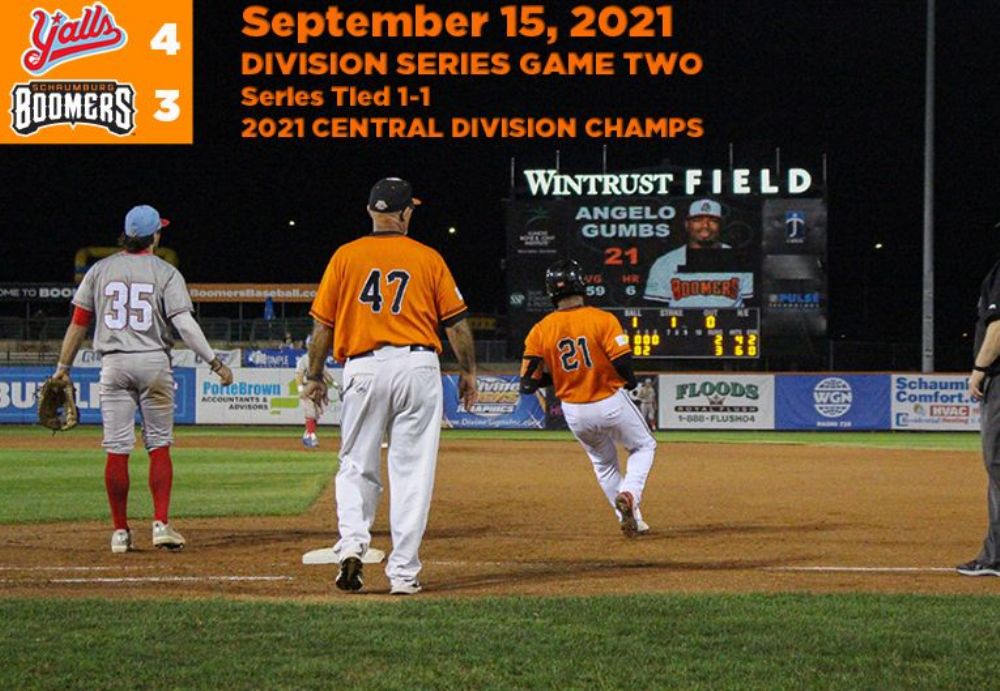 SCHAUMBURG, IL. — The 2021 Central Division Champion Schaumburg Boomers dropped a nail-biting game two to the Florence Y’Alls by a 4-3 final as Florence tied the best-of-five series at one game apiece.

The contest took an early turning point in the bottom of the first inning. Geoff Bramblett sat down Florence in order in the top of the inning before Alec Craig singled and Matt McGarry doubled to open the bottom of the frame. Quincy Nieporte was hit by a pitch to load the bases with one out but Florence induced a double-play ball to escape unscathed. The Y’Alls immediately answered with a pair of two-out runs in the top of the second on RBI singles from Jordan Brower and Connor Crane.

Schaumburg cut into the deficit in the bottom of the inning. Clint Hardy walked to lead off, stole second and swiped third before scoring on a throwing error. The Boomers took advantage of a Florence miscue in the fifth to open a 3-2 advantage. Luke Becker, who entered the game defensively in the top of the inning, reached on an error and scored when Chase Dawson doubled off the wall in right. Nieporte, the Frontier League MVP, followed with an RBI single to put the Boomers ahead.

Facing the Florence bullpen in the sixth, the Boomers again loaded the bases and came up empty. Luis Pintor recorded a two-out two-run double in the top of the seventh to account for the final as Karl Craigie and Joe Dougherty, who pitched for the Boomers briefly in 2019, retired nine straight to even the series. The Boomers left nine on base in the contest and finished just 1-for-10 with runners in scoring position.

The series shifts to Kentucky for a what has now become a best-of-three this weekend. RHP Ryan Middendorf (11-5, 3.15) takes the ball near his hometown against RHP Edgar Martinez (7-3, 4.58) on Friday night in game three at 6:00 p.m. central. Visit boomersbaseball.com for information.