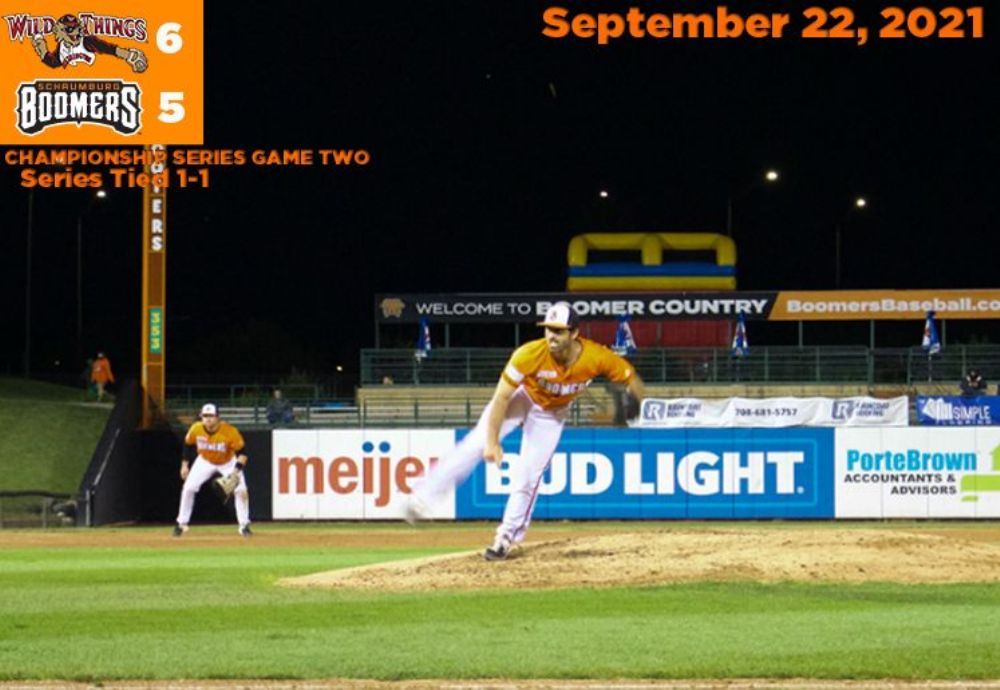 SCHAUMBURG, IL — Andrew Czech hit a go-ahead two-run homer with two outs in the ninth inning as the Washington Wild Things nabbed a 6-5 comeback win over the 2021 Central Division Champion Schaumburg Boomers to even the best-of-five Frontier League Championship Series at one game apiece.

After being shutout in the first game, Washington plated three runs in the top of the first. Scotty Dubrule started it all with a solo homer while Hector Roa and Trevor Casanova added RBI singles against start Geoff Bramblett. Washington sent eight to the plate in the inning and logged five hits after notching just six on Tuesday.

The Boomers had an immediate answer in the bottom of the inning. Alec Craig led off with a single and Quincy Nieporte worked a two-out walk. Braxton Davidson followed by pounding a game-tying homer over the wall in right, his second of the playoffs. Schaumburg led for the first time in the second inning when Clint Hardy was hit by a pitch with the bases loaded to score Nick Oddo.

Casanova tied the game at 4-4 with a two-out single in the top of the fourth. Craig was hit by a pitch with the bases loaded and two outs in the third to give the Boomers a 5-4 lead.

The contest turned into a battle of the bullpens. The Washington pen allowed just two hits in six innings as the Boomers could not find a way to add insurance, leaving the bases loaded in the third and stranding a runner at third in the eighth. The Wild Things placed the tying run at third base four times but were unable to push across the tying run against three different pitchers.

Roa led off the ninth with a single and stole second. Jack Snyder tallied consecutive strikeouts before Czech hit the game-winner, a liner over the wall in right. Zach Strecker recorded the final three outs for the save.

Washington posted 14 hits to even the series. BJ Sabol struck out six in three innings of relief to earn the win. Snyder suffered the loss despite striking out four. The Schaumburg pitching staff combined to strike out 14. Jake Joyce struck out four in 1.2 innings. Darrell Thompson struck out three in 1.1 frames.

The series now shifts to Pennsylvania where it becomes a best-of-three. RHP Ryan Middendorf (11-5, 3.15) makes the start for the Boomers after throwing a complete game in the third contest of the divisional series on the road. The contest is slated for a 6:05 p.m. Central start.