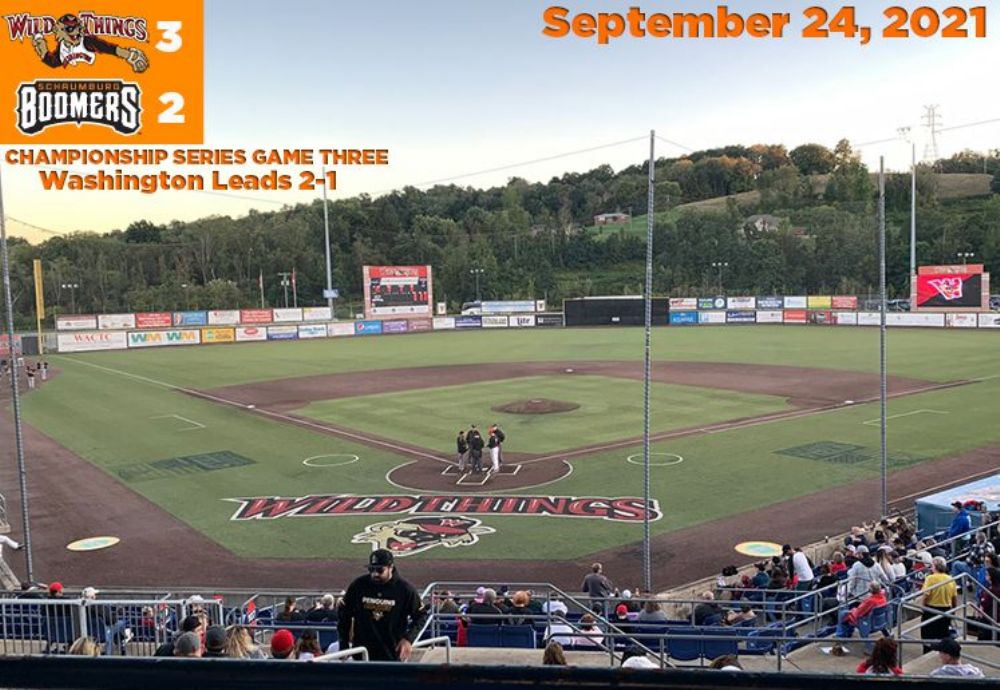 WASHINGTON, PA — Grant Heyman logged a broken-bat single in the bottom of the 10th inning as the Washington Wild Things recorded a 3-2 walk-off win over the Schaumburg Boomers in game three of the Frontier League Championship Series to grab a 2-1 edge in the best-of-five series.

The contest opened as a pitcher’s duel with nether team generating much offense. The Boomers notched just one hit until the seventh inning against Washington starter Alex Boshers. Matt McGarry singled to open the third inning and moved to third with one out but was stranded and Boshers began a string of 13 straight retired. Washington loaded the bases in the bottom of the third against Ryan Middendorf but did not score. Middendorf then retired 12 in a row until the bottom of the seventh.

The Boomers were able to open a 1-0 lead in the seventh when Braxton Davidson ended the stretch of 13 straight retired with a sharp single to right before moving to second on a Clint Hardy single. With two outs, Matt Bottcher stroked a single up the middle to score the first run.

Middendorf worked into the eighth before Washington took advantage of an error to tie the game on a wild pitch. The Boomers were able to score another run in the ninth to open a brief 2-1 lead. Bottcher was again the catalyst, recording a single with one out before moving to second on an error and advancing to third on a wild pitch. Chase Dawson drove home the go-ahead run by reaching on an error with the bases loaded. Luke Becker was thrown out at the plate attempting to score an insurance run to end the top of the frame.

Trevor Casanova singled with one out and stole second in the bottom of the ninth and with Washington down to the final strike, Tristan Peterson singled home the tying run against Thomas Nicoll. Washington has scored the tying or winning run in the ninth inning of the past two contests. Following a 1-2-3 top of the 10th, Nick Ward led off with a single against Jake Joyce and stole second before reaching third on a throwing error. Heyman delivered the game-winner with two strikes to pull Washington within a win of the Frontier League title.

Middendorf did not allow an earned run in seven innings of work, surrendering four hits to go with four strikeouts. Joyce suffered the loss. Bottcher tallied a pair of hits for the Boomers, who finished with nine in the game. The last two contests have been one-run decisions, both won by Washington. Schaumburg has played three elimination games in team history and is 3-0 with all three coming in 2014.