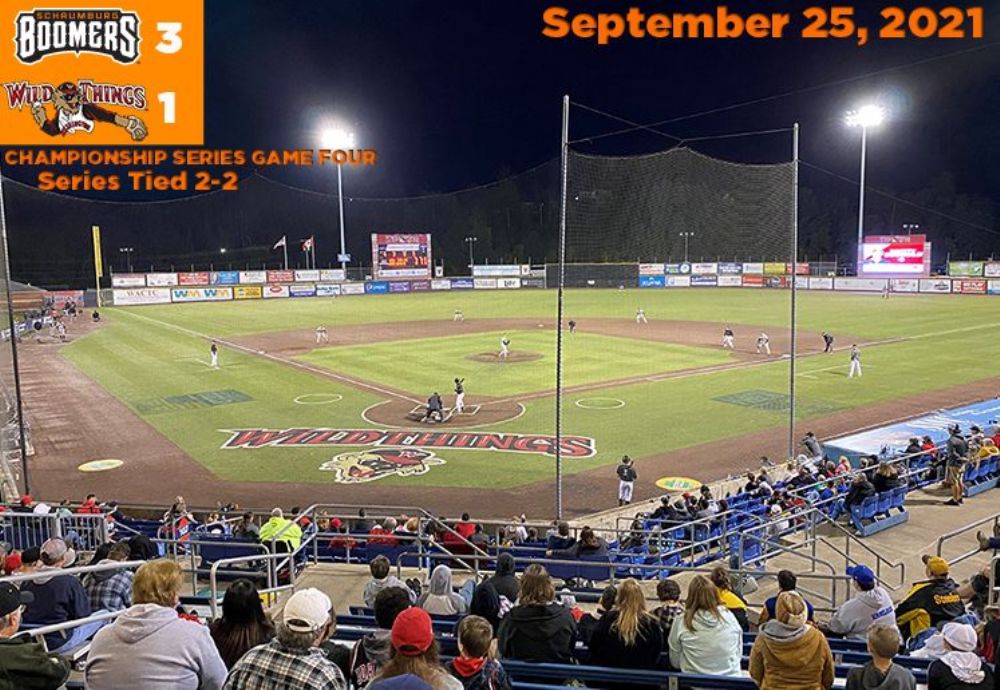 WASHINGTON, PA — The Schaumburg Boomers rode a strong pitching performance to a 3-1 win over the Washington Wild Things on the road Saturday night to force a decisive fifth game on Sunday.

Facing former big leaguer Rob Whalen, the Boomers jumped out to a 2-0 lead in the third. Washington left a runner at third in the bottom of the second against Schaumburg starter Erik Martinez before Nick Oddo recorded the first hit of the night. Whalen had retired the first six batters of the game. Following consecutive strikeouts, Chase Dawson kept the inning alive with a single up the middle. Quincy Nieporte deposited a two-run single to right to put the Boomers ahead.

Clint Hardy was hit by a pitch to open the fourth and Matt Bottcher followed with a single. Angelo Gumbs showed bunt before slashing a double down the line in right to extend the lead to 3-0. The Boomers left runners at second and third and did not score again as Whalen retired the next eight batters.

Martinez did not allow a hit from the second through the sixth, sitting down nine straight Washington hitters. Schaumburg put a runner in scoring position in three other innings but was unable to extend the lead. Martinez worked into the eighth, issuing back-to-back walks before giving way to Jack Snyder, who walked the first batter he faced to put the tying runs on with no outs. Nick Ward lifted a sacrifice fly to put Washington on the board, but Snyder recorded a strikeout and Darrell Thompson came on with another strikeout to strand the tying runs. Thompson twirled a 1-2-3 ninth to send the series to a decisive fifth game.

Martinez struck out eight and walked four while allowing four hits to earn the win in his first career playoff start, bettering Whalen, who struck out nine in seven innings. Thompson earned his first save of the playoffs. Dawson, Bottcher and Gumbs all notched two hits as the Boomers totaled eight.

The entire series has been back-and-forth. The deciding contest will take place at 4:35 p.m. Central on Sunday.