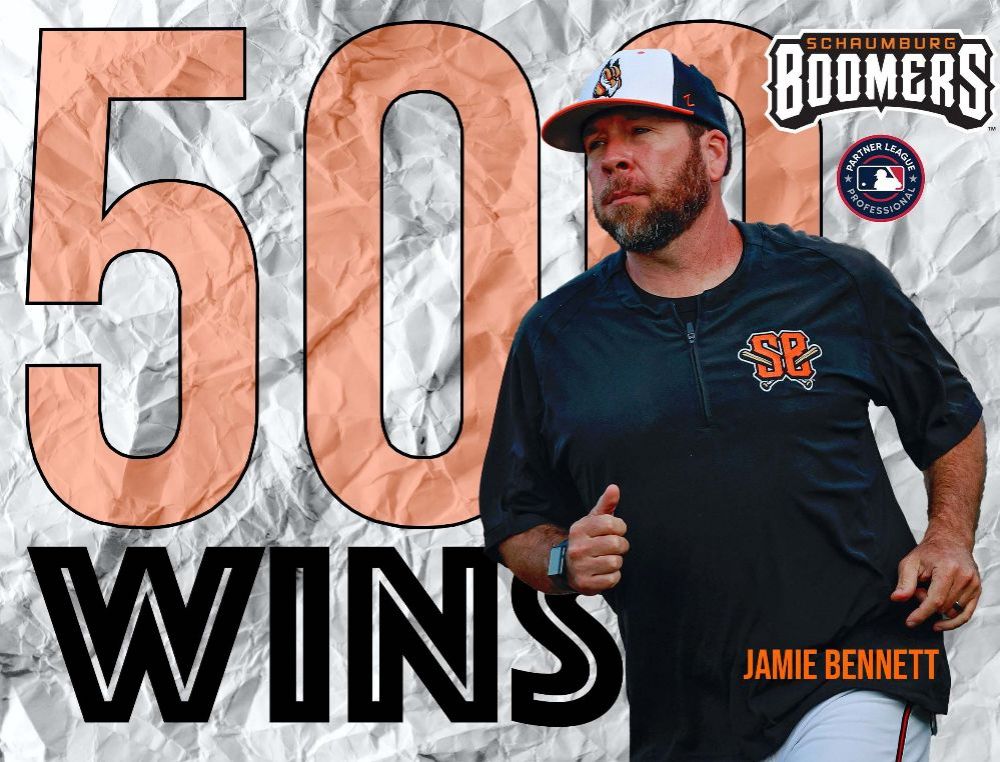 SCHAUMBURG, Ill. — The 2021 Frontier League Champion Schaumburg Boomers recorded the 500th win in franchise history by dispatching the Windy City ThunderBolts 5-2 in the opener of a six-game homestand before another boisterous crowd of over 6,000 at Wintrust Field.

The win was also the 500th for Jamie Bennett, the lone manager in franchise history. Bennett becomes the seventh skipper in league history to win 500 contests and owns a career mark of 500-362 with four Frontier League titles in this his 10th season at the helm.

Windy City opened the scoring with an unearned run in the top of the first but could do very little the rest of the way against Shumpei Yoshikawa. Yoshikawa struck out 11 in six innings to grab his fifth win of the year in his second performance with double-digit strikeouts this year. With 93 strikeouts on the season, Yoshikawa sits sixth in single season history and third in the league this year.

Alex Steinbach tied the game with a solo homer in the bottom of the third, his first as a professional. Steinbach is from Plainfield and hit the homer in front of many family and friends. Braxton Davidson recorded an RBI single in the fourth to put the Boomers ahead, extending his on-base streak to 26 games in the process. Windy City briefly tied the game in the top of the fifth but Blake Berry notched an RBI double to put the Boomers ahead for good. Chase Dawson homered in the sixth and William Salas added an RBI single in the contest.

Kristian Scott tallied his team leading 10th hold by working the seventh. Tanner Shears fanned two in the eighth. Darrell Thompson struck out the side for the ninth time this season in the ninth, posting his ninth save. The pitching staff matched a season high with 16 strikeouts. Dawson and Steinbach both posted a pair of hits.

The Boomers (36-32) continue the homestand tomorrow night at 6:00 p.m. The Frontier League Pitcher of the Week, RHP Aaron Glickstein (4-4, 3.56) is scheduled to start against former Schaumburg hurler LHP Bryan Ketchie (3-4, 5.07). The evening will feature postgame fireworks and the first 1,000 fans 21 and older will receive a Boomers Pint Glass courtesy of Michelob Ultra. Tickets for the 2022 season are on sale now! Visit boomersbaseball.com.