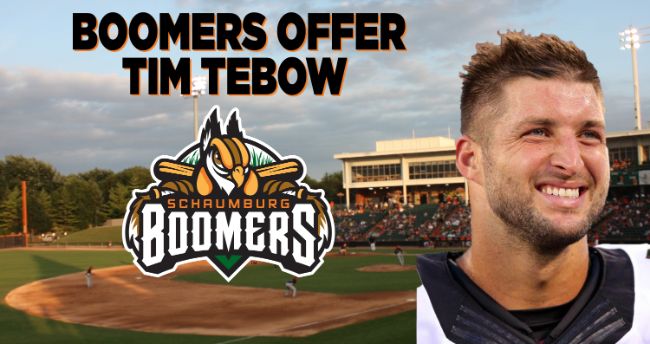 SCHAUMBURG, Ill. — The Schaumburg Boomers, a member of the independent Frontier League announced today that they have offered former NFL quarterback and Florida Gator, Tim Tebow, a contract to play as an outfielder for the franchise. Details about the contract have not been released.

The 29-year old Tebow played parts of three seasons in the NFL with the Denver Broncos and New York Jets in addition to participating in training camp during two other seasons with the New England Patriots and Philadelphia Eagles. Best known for being a quarterback for the Florida Gators who is outspoken about his Christian faith, Tebow led the Gators to two National Championships during his time in Gainesville, along with being the first college sophomore to ever win the Heisman Trophy.

“We’re looking for an athletic outfielder who can bring some leadership and competitiveness into the clubhouse,” said Schaumburg Boomers Manager Jamie Bennett, “Tebow brings all of those characteristics and then some. I think he’d be a great fit here in Schaumburg.”

“I understand that Tim’s ultimate goal is to make it to the major leagues, just like every other guy on our team,” stated Boomers General Manager Pete Laven, “With our proximity to Chicago and the fact that major league scouts come through our park on a regular basis, I think this is the perfect situation for Tim to showcase his skills in a game situation.”

More Info: The 2013 & 2014 Frontier League Champions and 2013 Organization of the Year, the Schaumburg Boomers are an independent professional baseball franchise based in Schaumburg, IL. Named after the Greater Prairie Chicken, which once roamed throughout Schaumburg and the surrounding areas in the 19th century, the Boomers excel in providing fun, affordable family entertainment and the best customer service in the business. For more information, visit www.boomersbaseball.com.