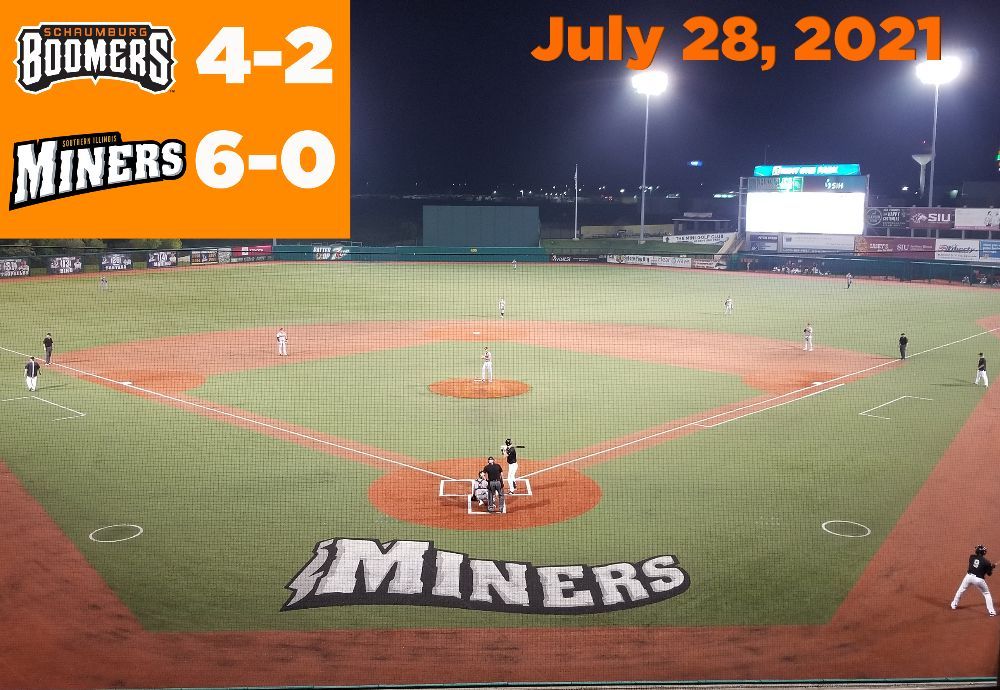 MARION, IL — The Schaumburg Boomers opened a nine-game roadtrip with a split of a doubleheader against the Southern Illinois Miners on Wednesday night, falling 6-4 in the opener before nabbing a 2-0 win the second contest.

Southern Illinois jumped out to a 3-0 lead in the first contest, scoring a run in the first and two in the third. The Boomers were able to tie the score by plating three unearned runs in the top of the fourth. One run scored on an error while Luke Becker singled home a run and Nick Oddo doubled home the tying run with two outs to chase the Southern Illinois starter. The Miners grabbed the lead again by scoring three times in the sixth. Schaumburg made it interesting in the seventh. Clint Hardy led off with a single and Oddo walked to bring the tying run to the plate. Chase Dawson singled home a run and a double steal placed runners at second and third but Southern Illinois was able to hang on for the win.

Game two served as a pitcher’s duel between the top two pitching teams in the league. Matt McGarry put Schaumburg ahead for the first time in the doubleheader with a deep homer down the left field line on the first pitch of the fourth. Alec Craig opened the fifth with his second homer of the year, tucking a liner inside the foul pole to make the score 2-0.

The offense was more than enough for Ryan Middendorf, who tossed five shutout innings and has thrown 13 blank frames against Southern Illinois on the year. Middendorf grabbed his sixth win of the season. Jake Joyce worked a 1-2-3 eighth and Thomas Nicoll a perfect ninth for his second save in the seventh shutout of the season for the Boomers.