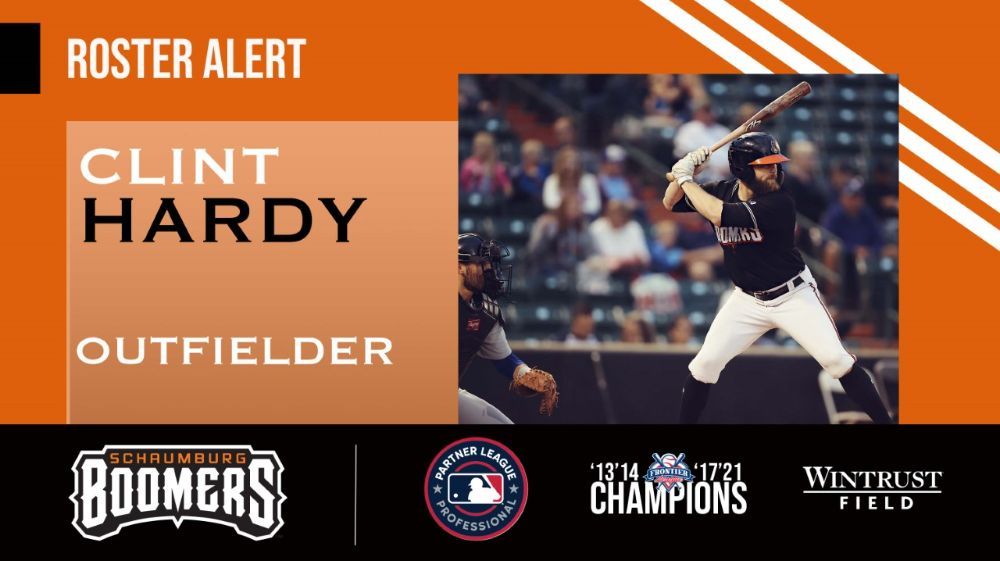 The Schaumburg Boomers are proud to announce that Clint Hardy will return in 2022 for his fourth season with the team.

After opening his career by playing in 55 games, Hardy moved into an every day role in 2019 and held down the starting slot in right field for the 2021 Frontier League Champions. Hardy finished third in the league with five outfield assists and posted a 1.000 fielding percentage over 101 total chances.

Hardy posted career highs during the 2021 championship season in RBIs (45), triples (4), runs (48), stolen bases (9) and walks (27). Hardy hit .253 with six homers in 2021, sporting and OPS of .721. The four triples are tied for the 10th most in single season team history. Hardy, who hit in all but two slots in the lineup during the season, tallied four hits against Lake Erie on July 24 and amassed 16 multi-hit games on the year along with 11 multi-RBI games.

Hardy connected on a pair of homers in the postseason last year, finishing the nine-game playoff run with a team best 10 runs scored. Hardy logged nine playoff hits, four of which were for extra bases. During game three of the Divisional Series at Florence, Hardy totaled three hits and three runs.

Hardy’s name is littered all over the franchise record book. The Georgia native is sixth all-time in games played with 221 and is tied for 10th all-time in runs (104) while sitting in a tie for seventh with 39 career doubles. Hardy has homered 16 times during his tenure with the Boomers, tied for sixth while knocking in 103 runs, eighth all-time. The right-handed hitter owns 21 career stolen bases.

Hardy came to the Boomers in 2018 after playing in six games for Traverse City in the 2017 Frontier League season, totaling just 15 at bats. Hardy was an NCAA Division II All-American at Augusta University.