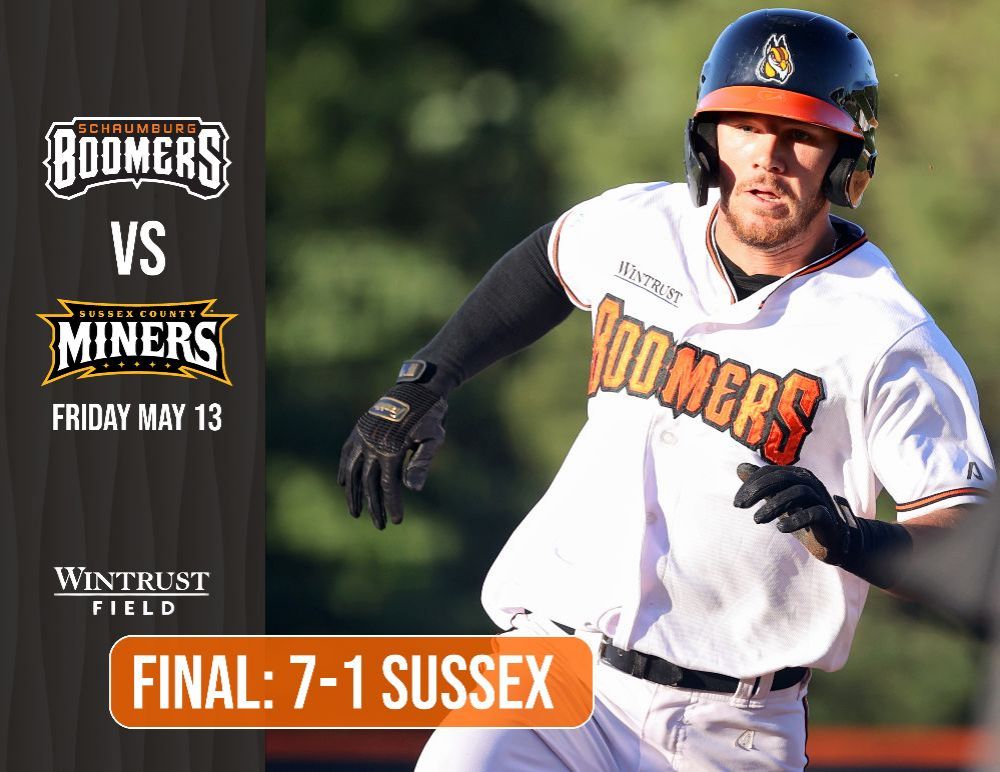 AUGUSTA, NJ — The 2021 Frontier League Champion Schaumburg Boomers posted 10 hits in the season opener but fell 7-1 at the hands of the Sussex County Miners in the first ever meeting between the two teams on Friday night.

Sussex County grabbed a 2-0 lead in the bottom of the first inning against Schaumburg starter Blake Stelzer and did not trail in the game. Clint Hardy blooped an RBI single in the fifth to score William Salas with the only run of the game. Chase Dawson tripled to open the sixth against a reliever but did not score and the hosts plated two in the bottom of the frame to turn the tide. Sussex County added two in the seventh on a homer from Justin Washington and made it 7-1 with an unearned run in the eighth.

Stelzer suffered the loss in his first professional start, working six innings. The former Southern Illinois right-hander sat down 11 straight Sussex County batters from the third through the sixth and finished with two walks, a hit batter and seven strikeouts. Juan Pichardo threw the seventh and Thomas Hart worked the eighth.

Alec Craig tallied two opposite field singles from the leadoff slot and Dawson notched a pair of hits. The Boomers were just 1-for-12 with runners in scoring position.

The Boomers (0-1) continue the season opening trip to the East Coast on Saturday night at 5:05 pm Central. RHP Ryan Middendorf (0-0, 0.00), who matched the single season record with 11 wins last year, will make his season debut against LHP James Mulry (0-0, 0.00) a former Boomer. Schaumburg returns home on May 20 to open the home schedule against Trois-Rivieres. The first 1,000 fans will receive a replica 2021 championship ring thanks to Salvi, Schostok & Pritchard as the team raises the banner and receives their rings from the fourth title in team history. All fans will receive a 2022 magnet schedule courtesy of Anthony DeGrado State Farm Agency. Tickets for the 2022 season are on sale now! Visit boomersbaseball.com.