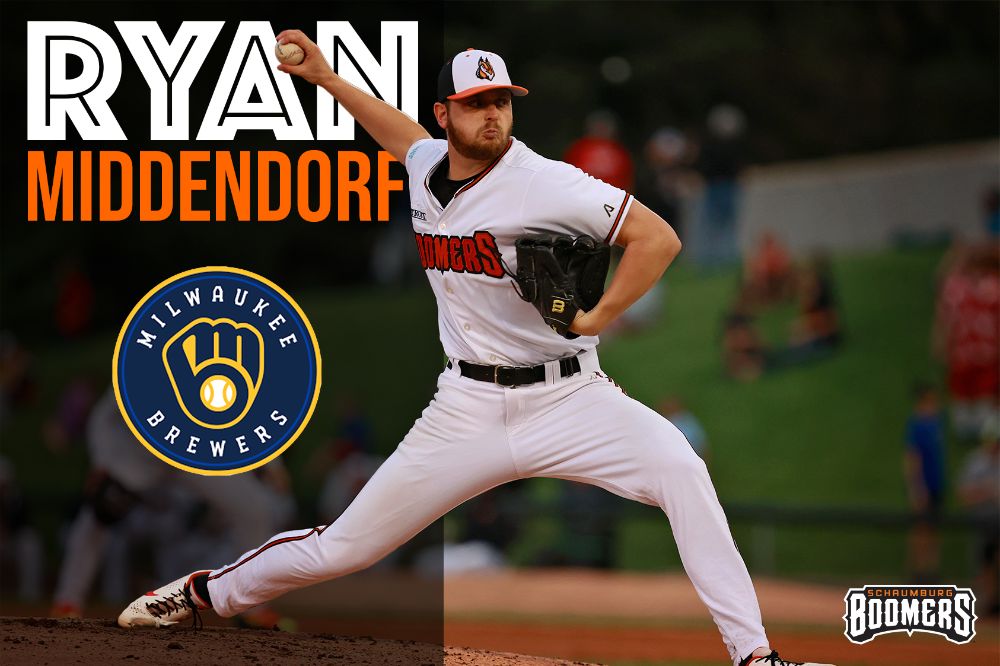 SCHAUMBURG, Ill. — It is with great pleasure that the 2021 Frontier League Champion Schaumburg Boomers announce that starting pitcher Ryan Middendorf has been purchased by the Milwaukee Brewers.

“We are very excited for Middendorf to receive this opportunity,” 10th Year Manager Jamie Bennett said. “He has worked extremely hard to get where he is and is very deserving. He’s a heck of a competitor and we look forward to watching has career continue.”

Middendorf established himself as one of the top starters in the league this season, leading the league in strikeouts following his final outing with the Boomers. The right-handed pitcher posted three consecutive starts with double-digit strikeouts, fanning 12 on May 26 against the Empire State Greys, carrying a one-hit shutout into the ninth. Middendorf flirted with a no-hitter in his final outing with the team on June 8 against Gateway, not allowing a hit for the first 5.2 innings while finishing with 11 strikeouts.

For the season, Middendorf struck out 40 batters in 33.1 innings over five starts. The Ohio native owned a 3-1 record with a 2.70 ERA and had strung together four consecutive quality starts. Middendorf started the home opener for the Boomers this season and struck out 37 batters in his final four starts over 28.1 innings, working at least eight innings twice.

Middendorf is headed to Arizona to re-unite with Connor Reed, Pitching Coach for the Boomers in 2021 who now works with the Brewers. Jake Cousins, who pitched for the Boomers in 2019, had his contract purchased by the Brewers and became the first Schaumburg player to reach the big leagues in 2021. Middendorf is the first member of the 2022 team to have his contract purchased after several members of the 2021 team joined the affiliated ranks.

The Boomers (14-12) will return home tonight against Evansville to open a five game homestand packed with fun. Tonight night is Educator Appreciation Night and $1 Hot Dog Night. Teachers and school faculty can receive four free tickets with promo code TEACH thanks to Waterville Advisors. RHP Shumpei Yoshikawa (2-2, 6.14) takes the ball in the opener against RHP Parker Brahms (2-1, 2.16). Tickets for the 2022 season are on sale now! Visit boomersbaseball.com.