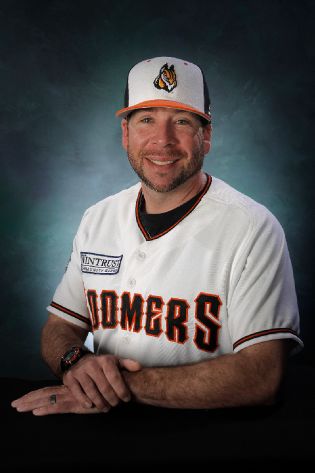 Jamie Bennett has been the field manager of the Schaumburg Boomers since our inaugural season, joining the organization in October 2011.

When he spoke at the team’s unveiling event, Bennett promised to build a team that the Village of Schaumburg and the Northwest Suburbs could be proud of, and Bennett is man of his word. The 2013 Boomers captured Schaumburg’s first-ever professional sports championship, the team went on to win again in 2014, and the Boomers brought home the team’s third title in 2017.

Bennett played at the University of Tennessee as an all-SEC pitcher for the Volunteers. In 149.2 innings, which included 19 starts and six complete games during the 2000 season, the southpaw earned a 10-4 record and an ERA of 2.71, striking out 111 and walking just 39.

Originally selected by the Philadelphia Phillies in 2000 during the 22nd round of the Major League entry draft, Bennett pitched two seasons for the Batavia Muckdogs, the Single-A affiliate of the Phillies in the New York-Pennsylvania League. A veteran of 104 minor league games that included 78 starts, Bennett had a career record of 37-18 and an ERA of 3.89. The southpaw also racked up 379 strikeouts to just 138 walks in 513.2 innings as a professional.

In 2002, Bennett joined the ranks of independent baseball, becoming a pitcher for the Frontier League’s former team, the Dubois County Dragons, under the leadership of mentor Greg Tagert, who eventually became manager of the Gary SouthShore RailCats.

In what would be his final season as a player, Bennett was recruited to pitch for his former manager in Gary, Indiana. In 2005, Bennett earned a 10-5 record in 150 innings over 24 starts while striking out 68 and walking only 27. He started and won Game Five of the 2005 Northern League Championship Series for the RailCats to secure the franchise’s first Championship.

During his playing career, Bennett also served as an assistant coach at Division II baseball powerhouse University of South Carolina at Aiken. This experience would serve him well as he transitioned his career from pitching to coaching and management.

After retiring as a player, Bennett began his coaching career in 2006, mid-season, as a Pitching Coach for the RailCats. The team had an ERA of 5.63 before his arrival; over the remaining 62 games that season, the team’s ERA dropped to 3.45. This turnaround for the pitching staff was key to carrying the RailCats to the postseason that year.

Over the next two years as Pitching Manager, the RailCats twice posted ERAs under 4.00, earning Bennett the league’s Pitcher of the Year recognitions in 2007 and 2008. During his tenure, five RailCats pitchers earned All-Star Team assignments, two of whom were named to Baseball America's All-Independent Teams. Four of Bennett’s pitchers—Willie Glen, Chad Blackwell, Kris Regas and Edwin Walker—went on to play for Major League organizations.

Accomplishments with the Boomers
In 2011, Pat Salvi, Owner & CEO of the RailCats, expanded his enterprise by launching his second team—the Schaumburg Boomers. With his deep knowledge and appreciation of Bennett’s talents, Salvi had his top choice for the Boomers’ first Field Manager.

During the Boomers inaugural season, Bennett led the Boomers to a 54-42 regular season record, leading the league for the first half of the season and falling only a single game short of a post-season berth. Fortunes would be even better in 2013 when Bennett piloted the Boomers to the best record in the regular season (59-37), and Schaumburg became the first Frontier League team ever to sweep all of their competition with a 6-0 playoff record. For all these reasons, Bennett earned his first Frontier League Manager of the Year accolade in 2013.

Jamie spends his off-seasons in his native Tennessee with his wife Julie and his two sons, Ollie and Sully.